HE WHO HESITATES DIPS

I've not spent a lot of time birding recently, but the time I have spent hasn't added to my Surrey list, which was coming along well, but has now totally dried up these past couple of weeks.

It didn't help missing out on two Avocets that appeared on the Holmethorpe patch yesterday morning. First seen by Graham James at around 6.00am, they were swimming around in the Water Colour Lagoons before relocating on Spynes Mere. Graham sent me the news via a text just after 6.30am, but I didn't see it until I got up a couple of hours later.

Now, in the past I would have dropped everything, put on some clothes and dashed out to Spynes to see them. But not today. No, I thought about it and knowing my wife would look at me with utter disdain at my ridiculous haste, I decided not to rush. In fact, I took my time in the shower, made a second cup of tea and read a few emails before eventually setting off just before 10.30am.

Unbeknown to me, the birds decided they had stayed long enough and took off, heading eastwards at 10.22am, never to be seen again. I missed them by about eight minutes - about the same time it takes to make and then drink a cup of tea.

It will be no surprise to learn I was mightily pissed off. I went back home, and tried to put it to the back of my mind with the rest of 'the dips that really pissed me off' memories stored away there.

Annie could see how disappointed I was in missing out on these two Avocets, so she suggested we go for a late afternoon walk around Thursley Common. The hope was I would connect with a Hen Harrier. A ringtail had been seen for the last two days there.

In all the trips I have ever made to Thursley – and they are many – I have never, ever seen a Hen Harrier there. And guess what? I didn't see one on this occasion either. One was seen between 11.00am and midday, but not from 4pm until 5.45pm, when we were there. 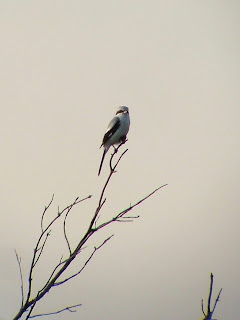 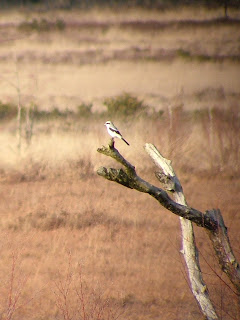 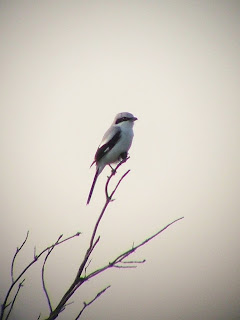 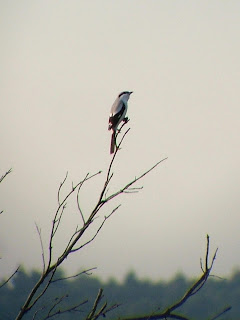 For once, I wasn't looking for a Shrike, but that's when you tend to bump into them. And that is what happened here. The Great Grey Shrike was the same one I saw back in October and then in January – a very smart individual that favours the Ockley Common area of Thursley. We got great views of it as we walked along the tumulus area of the Common, and we followed it around Ockley Common on a loop back towards the car park. The Shrike turned the day around for me.

I doubt whether I will ever get to see a Hen Harrier quartering this site - it would mean having to spend literally a whole day here, with no guarantee of a positive result. Can't see me doing that...
Posted by Factor at 01:12