WHY A LOCAL PATCH MED GULL IS GOOD FOR YOU (WELL, FOR ME AT ANY RATE)

The sun was out today. It was warm, the light was noticeably brighter, the days are getting longer.
It’s the time when thoughts of spring migrants flocking to our shores fill us with hope and expectation.


By now, most of the interesting winter migrants have been seen and logged, apart from, in my case, one or two I haven’t gone out of my way to look for, like a Bittern, Jack Snipe or Mealy Redpoll.
I could have gone to Barnes this afternoon to see a Bittern (and maybe a Jack Snipe), and perhaps wandered around Leith Hill in the hope of finding a Mealy, but the truth is I couldn't muster the enthusiasm.
Instead, I went over to my local patch to see a Mediterranean Gull that was happily swimming around with some Black-headed Gulls close to the sand spit on Spynes Mere lake. It was only a relatively brief visit, but one Med Gull, a couple of Shelducks and a Goldeneye were enough to keep my happy, and I could get on with the rest of my day contented and relaxed. As birding outings go, it was better for my spirit than a long-haul twitch to see a bird for the first time. 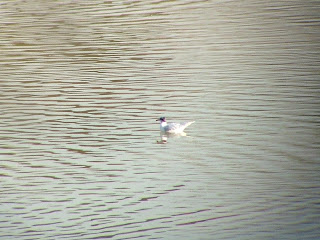 But I nearly ruined it all. I made a vow at the end of last year that I would never make a specific journey to see a Firecrest. A beautiful little bird, I admit, but a nemesis to me. It’s been two years since I saw the last one – on Banstead Gold Course – and I’ve been many times since to try and see another one. I’ve failed every time – not even heard one, let alone see one of the little blighters.
So, seeing as it was a lovely day and I’d already seen the Med Gull, in a fit of pique I went to Banstead once again to see if I could find a Firecrest. One had been reported earlier in the day, so I thought I could, at long last, break this bad run. But no. Didn’t see one, didn’t even hear one.
I’ve now made yet another vow. This time I’m not going to go to that bloody golf course again. I have developed a genuine distaste for it and the footpath that runs alongside it (sorry, David). A Firecrest will have to come to me in future. I can live without one. It will remain off my year list for the foreseeable future.
I always seem to end up Surrey listing but even then I’m not pathological about it. No, really! If a really interesting bird – one I haven’t seen before – turns up locally the chances are I’ll find a good reason to get in the car with my scope, binoculars and camera and set off in search of it. Otherwise, I’m more likely to stay where I am or go somewhere to see birds I prefer to watch instead, like Short-eared Owls, and amazingly (a quite recent fascination) gulls.
The Parrot Crossbill, just over the border in Sussex, is one such bird I ought to go and see, but for some reason I haven’t. The same goes for the Paddyfield Warbler on the coast. Both aren’t that far away, and yet I haven’t gone to tick them off my life list.
Originally, I was put off the Crossbill because of the doubts about whether it was a Parrot or not, but I have spoken to many experienced birders since and they all say categorically that it is one. The Warbler was apparently elusive at first (another excuse not to travel down to Pagham), but is now showing well.
So, what is it with me?
I think I’m still trying to find my position in the birding scheme of things. Some people are twitchers, some are patch birders, some are neither. I am neither at the moment, although my patch is increasingly becoming more important by the day.
I like going on the odd twitch, like I did in January for the Dark-eyed Junco and Spanish Sparrow, but it has to be a bird that, for whatever reason, captures my imagination. Both the Paddyfield Warbler and the Parrot Crossbill tick that box, so why not go for both?
I think it is the threat of disappointment twitching can brings as baggage. I hate the idea of going somewhere on a specific journey, to see a bird that doesn’t show. People keep telling me that is what makes birding so fascinating, but I can’t think of anything worse than turning up somewhere not to achieve the purpose of a visit.
If you love football, and Chelsea in particular (I’m not a fan, by the way – this is just an example for geographical purposes) you don’t invest time and money to go to an away game – say to Sunderland – only to arrive to find they won’t let you in. If you went to many such away games and the same thing kept happening, you’d soon become despondent and eventually opt to stay at home and watch the game on the telly.
After a few experiences like this, negativity inevitably seeps through. When the chance to travel to Milan for an away leg of a Champions League semi-final is on the cards, for example, what would you do (if you were me)? You'd find a reason not to go, wouldn't you? Well, that’s my theory and I’m sticking to it.
What I should have done, when the Parrot Crossbill was first announced, was to hop in the car and get the twitch over and done with - whether I saw it or not. Having deliberated endlessly about whether to go, there was always the risk the experience wouldn’t be enjoyable whatever the outcome. I delayed going for the Tundra Bean Goose at Thorpe Park recently, and by the time I decided to go for it, it was too late. The Goose had gone.
I don’t know how some twitchers keep their sanity. The birder Tom McKinney calls the Kerry Katona of twitching and one of the birders featured on the BBC documentary 'Twitching – A Very British Obsession', Garry Bagnell, has seen more than 500 birds in Britain and Ireland. He has managed this feat in a relatively short space of time, just ten years or so. He even had to give up plane spotting to achieve this. Imagine that! He must have dipped at least a third of these birds during that time. I couldn't cope with that.
A remarkable feat then, but what happens now? After a frenzy of twitching, Garry now has just a handful of birds he can see each year that he can honestly say he has never seen before. Presumably, he now has to create a new list category simply to wet his twitching juices. From reading his blog, he has managed that.
It's all about finding a balance and getting things in perspective. I’m actually quite happy to bide my time. I’m going for the long haul for the next 20 years. If it is convenient to go for the Slender-billed Curlew on any given day, well, I might consider it. It depends…
Posted by Factor at 23:43