DESIGNS ON A DARTFORD WARBLER

Although I told anyone that would listen that there was no way I would watch the Royal Wedding, having little or no interest in it, I ended up doing exactly that. And, to make matters worse, I felt quite stirred by the occasion. I think it was something to do with the fact we are really good at this kind of thing, probably better than any other nation on the planet, and that in general it made people feel good - it was certainly a distraction from all the normal doom and gloom of everyday life.

On the birding front, I went out this morning for another attempt at finding a Dartford Warbler at Chobham Common. I parked up at the Longcross end of the Common at about 9.00am and spent the next couple of hours looking in totally the wrong place. I had been sent some Ordnance Survey co-ordinates by Rich Sergeant but hadn't looked at the map (actually I used the Streetmap website) properly.

I did see my first of two Garden Warbler (136) of the year, singing enthusiastically close by. I managed to see these two quite close up but they didn't stay still long enough to take a record photo.

It's the nature of digiscoping, particularly if you are like me and you don't have a jig to drop on to your scope. I just butt my Fujifilm FinePix S7000 directly up to the rubber eye piece and hope for the best. It all takes time to set up though, and if you have a hyperactive moving target it can pretty much be a hopeless, or hapless, task.

I heard a Tree Pipit in the distance, heard countless Chiffchaff, Willow Warbler and Blackcap, plus I also had good views of a couple of male Stonechat, and saw a couple of Redstart fly over after I had startled them out of a tree.

All very nice, but still no Dartford Warbler. Then, as I made my way back to the car park, I looked on the Streetmap site again, and eventually discovered my mistake. I had to look further east. I followed the path down from the car park and then took the first fork to the left. Another 300 yards further ahead passed some pine trees, I suddenly heard the distinctive chatter of a Dartford Warbler (137). It was a striking male, and it perched on a gorse bush branch just next to the footpath. The sun was shining, the Warbler was just ten feet away, the photo of a lifetime.

Then a dog bounded towards me.

The smiling dog walker, (he was friendly, I'll give him that) plus child and two dogs, trotted past the Warbler and then me. The Dartford Warbler took flight, never to return for the next hour.

I had to give it up. I could always come back another time. At least I now knew where to look. And I'd make sure to turn up earlier in the day.

I plonked my stuff in the back of the car and headed off for Staines Reservoir, not that far up the road from Chobham. Waders had been quite active around the Surrey area for the past couple of days, notably Bar-tailed Godwit, Greenshank and Wood Sandpiper.

It was a breezy day, so it was no surprise that the wind was particularly fierce up on the causeway. There were plenty of gulls around, with a few Little Gulls in amongst the Black-headed Gulls. Also on the causeway was Tim Harrop from Teddington, who I had met a few months back at Bookham Common where we had both been looking (successfully) for Hawfinch.

Just ten minutes earlier he had seen a Little Tern on the north basin, but we couldn't locate it again. We saw a couple of Common Terns, but no Little 'un. Tim had to leave for a christening, so we walked up to the eastern end of the causeway together - he departed for his car and I stuck around in the hope of seeing a Slavonian Grebe in full summer plumage - but I couldn't see it anywhere.

What I did see, however, were a group of five waders on the eastern bank of the south basin. They were a bit too far away to see very well, but I could figure out that one of them was a Greenshank (138), but wasn't sure about the other four, only that three were the same species. I took some record photos and left.

Once I got back home, I blew a couple of images up and sent them to Graham James, to see what he thought they were. I had already looked of the London Bird Club site to catch up with what had been seen today, and before I had arrived there this morning, a Greenshank had been recorded (confirmed), three Bar-Tailed Godwit, and a Turnstone, as well as the near-resident Great Northern Diver and Slavonian Grebe (dammit). 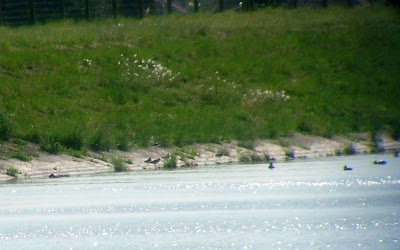 Three of the birds, all sleeping on and off, had the same plumage. One of the others had distinct black markings on its head and chest. Graham came back to me and reckoned the black-marking bird was a summer plumage Grey Plover (139). Looking at it again, it almost certainly is. Later in the day, two were seen flying over the area. Graham also thought the shape of the others would match the Bar-tailed Godwit (140) seen earlier that morning. I decided this evidence was enough to give me the ticks allotted - unless, of course, anyone really thinks I'm clutching at straws. If enough people think that's the case I'll bin the 'Wit.

So, that was better than expected. Later in the early evening I went over to my local patch at Spynes Mere to see the Greenshank that was still present from late morning. it had been joined by a couple of Common Sandpiper. 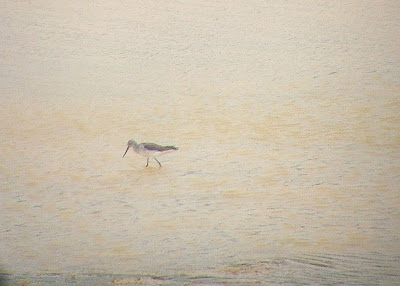 Tomorrow, if I get the chance, I'll return to all three destinations in the hope of getting a decent photo of the Dartford Warbler, and to see what other waders decide to pay us a visit.

Note on May 3: Having looked at some of the other images I have of the birds on the bank at Staines, I've come to the conclusion that the Grey Plover is actually another Bar-tailed Godwit, so I'm taking it off my list.
Posted by Factor at 23:23