BLACK REDSTART DROPS IN AT HOLMETHORPE AS OSPREY MAKES THE NEWS

I have been trying, without much success, to get my better half interested in my hobbies. I have had a number of obsessions over the years, and she hasn't even remotely been interested in any of them. My long-term passion has been motorsport - predominantly Brisca (British Stock Car Association) F1 Stock car racing (if you watched Gears and Tears on BBC1 a few months back you will know what I'm on about), a sport I have had a passion for since I was a boy. I even wrote a book about the subject more than ten years ago, and stock car fans still contact me to see whether I have copies left. I'm also keen on NASCAR, the American stock car series, horse racing - I have worked in the racing media, on and off, since I left college back in the early 80s - and of course, bird watching.

Annie enjoyed Gears and Tears on TV, which gave me hope, and she has shown a flicker of awareness when I talk about Kingfishers, or any other colourful bird. Then yesterday, she read something about an Osprey in the Observer newspaper that captured her imagination.

This species has a special bond with the general public because of its history. I remember as a child reading about a breeding pair in Scotland, with a 24-hour watch over their barbed wire-ladened tree to stop egg collectors grabbing the precious eggs. Now, of course, Ospreys are one of our success stories with an estimated 148 breeding pairs in Britain.

But the Osprey in question in the Observer is the subject of a remarkable story. Ospreys are thought to live for about eight years or so, but this female, known as Lady - who has nested at the Loch of the Lowes Nature Reserve in Perthshire for the past 19 years - is 26 years old, has had 48 fledglings and has outlived two mates. She was back again, and was waiting for the return of her current mate, a ten-year-old male.

Being a romantic soul, Annie thought this was amazing, and when I mentioned today that Gordon Hay had seen an Osprey drifting south above Godstone village this lunchtime, she wondered whether it was him. There was also a sighting at Weir Wood Reservoir near East Grinstead some 15 minutes later.

As it turns out, Lady's mate is back, so expect her fledgling number to pass the half-century mark. 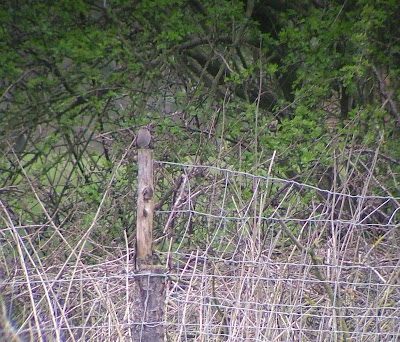 Today was grey, windy and cold, and I had plenty of work to do, but late in the afternoon Graham James emailed me to let me know there was a Black Redstart over by the horse paddocks next to the oak trees at Mercers Farm. Having not found the Black Redstart at Canons Farm yesterday, and although I was busy, I had to go and have a look.

I met up with Gordon, who had found the bird, and it wasn't long before I was looking at a flighty female Black Redstart (118) flitting from fence post to fence post. Behind us in the ploughed field by the footpath a first-summer male Wheatear darted around searching for food. 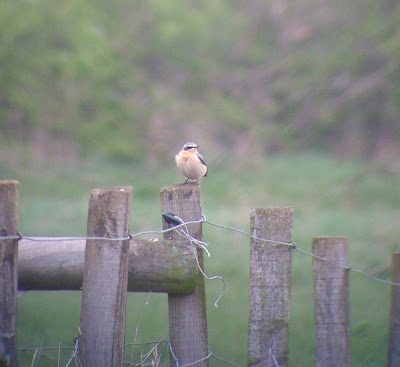 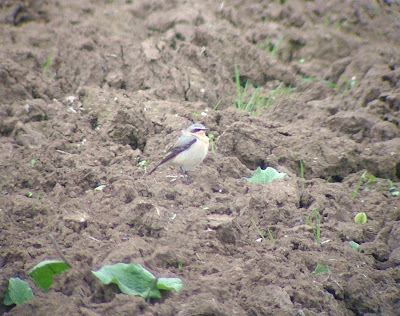 Graham James and Paul Kerry then arrived, and although the Black Redstart was the rarer visitor, it was the striking male Wheatear that we tended to pay most attention to. I'm sure Annie would enjoy watching the Wheatear too, if I could only coax her to come and have a look.
Posted by Factor at 20:30