As much as I want it to be, bird watching is not like window shopping. No matter how you organise and plan a morning's walk, you can never guarantee you will see half the birds you want to see.

You have to train yourself to have an open mind, and to be thankful you have the spare time to spend on your favourite pastime.

That's what I try to do, but I struggle. A lot of my issues surround the fact I don't have as much spare time to spend on my favourite hobby as I want. I want it all, with a cherry on top. Some people seem to have it in spades. I don't.

It was with this mindset I planned a morning out on Sunday, and while the initial idea looked sound enough, the reality was not quite as I had hoped. The idea was to go and see new birds, not Surrey year list birds, just different ones for 2011 and it didn't matter where they were (within reason).

So I had choices, probably too many. With hindsight I should have planned it better, and not tried, like I've said I wouldn't do on the past, to cram so much into a six-hour period as possible. I always fall head first into it and every time I come up short.

I had three target birds. The first was a Shorelark, of which there have been three at Reculver in Kent all winter. The second was a Spoonbill, of which one has wintered up the Swale Estuary at both Oare Marshes and Elmley Marshes in Kent. The third bird was anything interesting like a Hen Harrier or a Short-eared Owl. The Temminck's Stint would also have been a bonus at Oare.

So, it was looking quite a strong possibility I would end up at two out of three Kent destinations. I ended up going for the Shorelark/Spoonbill/Temminck's Stint combo.

To cut a long story short, I didn't see any of these three. I walked the shoreline at Reculver on a gorgeous spring morning, and saw a stack of waders - plenty of Oystercatcher, Turnstone, Redshank, Ringed Plover, a Little Ringed Plover (seen plenty in Surrey, but strangely very exciting for the local birding community), Dunlin and a Sanderling. 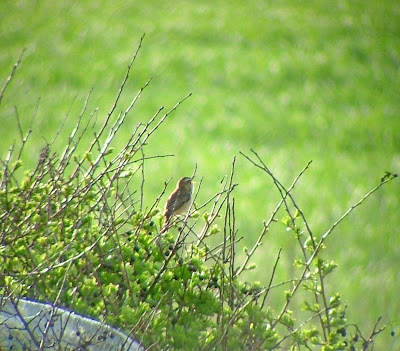 I saw a first summer male Wheatear briefly perched on the wall next to the footpath that continues miles into the distance east of the Roman Fort, before it flew off to the west. I saw more Sedge Warblers than I can remember in one place - probably 12 in all - chattering in the reeds that run parallel to the footpath for about a mile. I saw a pair of Stonechat and probably the highlight of the visit, a striking Yellow Wagtail perched on top of a bush. But no Shorelark. Or Marsh Harrier. Or Hen Harrier. Or Short-eared Owl. 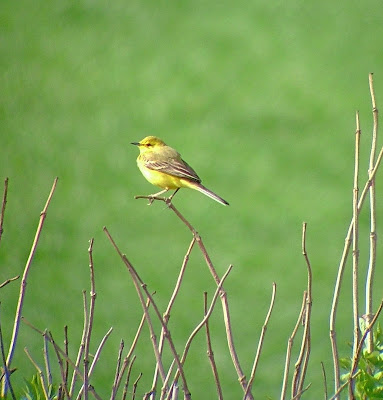 It was disappointing. I can't deny it.

The next stop was Oare Marshes. I heard a Cetti's Warbler and a few Bearded Tits in the reeds, a Reed Warbler also sang in the reeds next to the car park, and as the tide was out, plenty of waders were on the Swale Estuary - loads of Curlews, Redshank, Dunlin and a couple of Avocets. On the East flood were about 200 Black-tailed Godwits that took flight at one point, which was a amazing sight. Over on the west side of the lane I saw a Common Whitethroat and three Little Egrets. Highlight of the visit was just as I was about to leave. A Marsh Harrier cruised low over the West Hide and I got great views of it through the scope. But no Spoonbill (seen earlier on the Estuary) or Temminck's Stint (probably wouldn't have known if I was looking at it anyway). 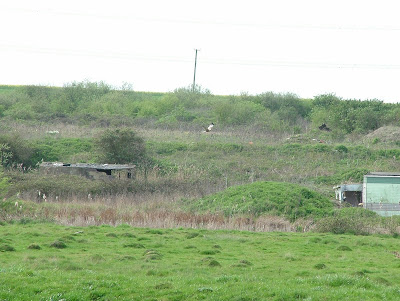 Again, it was disappointing. I can't deny it.

So off home I went. During the journey back on the Kent side of the border I saw a Kestrel (not seen many this year anywhere so far - where are they?), a Sparrowhawk, three Buzzards and a Red Kite.

Later I discovered, through the wonder of the birding internet sites, that the Spoonbill was at Elmley Marshes, together with a Whiskered Tern that was showing well all day. The Shorelarks at Reculver reappeared the next morning. Also seen at Elmley yesterday was a Short-eared Owl and a Hen Harrier.

Back at base, a Ring Ouzel was still present at Canons Farm - Holmethorpe had had one briefly on Saturday morning. There were plenty of Wheatear to enjoy, and a Hen Harrier flew over in the morning.

I got out briefly yesterday lunchtime, when I got good views of a Wheatear that had flown from the Water Colour Mound to the row of conifers behind it. 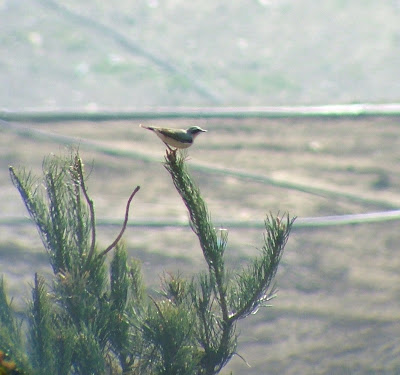 Now and for the rest of the week I will be glued to my desk, occasionally peering at the Rare Bird Alert website, just to upset myself.
Posted by Factor at 01:25