GROPING FOR A GROPPER

It's been a frustrating week. Too much work and missed opportunities, allied with a couple of local twitches with mixed fortunes.

Around the county all manner of migrants have dropped in at various areas, while others have been gathering ready for the away trip back to their breeding grounds. More than 200 Bramblings have been seen flocking at Thursley Common - I haven't even seen one this year let alone 200, so it would have been an interesting trip to see them, if I had had the chance.

Arctic Terns have been seen at Staines Reservoir, a few Ring Ouzels, Redstarts, and Tree Pipits have also been dotted around the county, and the first Nightingales are back at Bookham Common - I, in the meantime, have been putting a magazine to bed this week, so any sightings had to be local.

Remarkably, the place that continues to be the Surrey hotspot is Canons Farm, near Banstead. David Campbell, the teenager who has been resolutely walking his patch for the past few weeks, has had a number of fantastic birds drop in. After the Ring Ouzels, Black Redstarts and Common Redstarts last week, he had a major find on Wednesday. A Wood Warbler was heard and then seen in the wooded area next to Circle Field (where the Lesser Spotted Woodpeckers are regularly seen). These migrants are now a real rarity in Surrey, so it was a bird I really wanted to see. Even Annie came along for the twitch, but despite being steered in the right direction by David, we couldn't locate it. The chances are by the mid-afternoon, when we arrived, it had moved on. A real shame, but more was to follow yesterday. 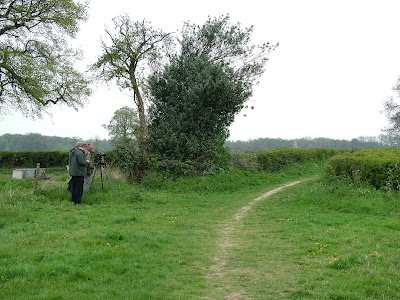 At 6.45am I got a text from David. A Grasshopper Warbler was reeling in the hedgerow next to the footpath just north of the farm. This I had to see(!), so I was up at the Farm by 8.15am. I met up with Johnny 'Badgeman' Allan and Ian 'Eagle' Jones who had both arrived much earlier. We waited for at 30 minutes and then the Grasshopper Warbler started reeling. As it did so, we all struggled to see the bird in the dense hedgerow. It was only about ten feet away, but we couldn't get on to it. It then went quiet again, and I was becoming aware of the time - I had to get back to work. I hung on for as long as I could, but soon I was driving back down the A217.

I couldn't, in my own mind, really count it as a Surrey tick, but I did for one of the websites I list with, the Surrey Birders. Hearing a bird is one thing, but seeing it it a darn site better, and certainly more satisfying.

As I walked through the front door, I received another text from David - both he and Johnny had seen the bird. All fairly typical for me at the moment. I went back to the Farm at about 6.00pm, but didn't hear it this time, and as it was heard again but in a different location today (I was visiting family) I will be out tomorrow morning for another trip around the county in search of the Gropper and some new Surrey birds.
Posted by Factor at 23:22