After much consideration and discussions with other experienced birders I have officially given myself a year tick for the Grasshopper Warbler (120) heard on Friday. I saw my first Gropper last April during Holmethorpe's Bird Race, and while it was the topic of much discussion at the time as to whether I did see one because I was the only person to see and hear it and I wasn't a very experienced birder (I've learnt so much since then), I got the nod in the end.

Hopefully, this spring I will be able to add a visual sighting to give me peace of mind, but in the meantime, this morning I headed for Staines. There were plenty of potential Surrey year ticks to be had, and predictably I had a shopping list at the ready. I was optimistically hoping for nine new sightings, but in the end I had to settle for four - in itself, not a bad total, and certainly more realistic.

The walk along the footpath to the north of Staines Moor was full of fervent bird song, with four extremely vocal and showy Sedge Warblers (121) adding to my list. Next up was the first of five or six Reed Warblers (122) chattering away as I approached the wooden bridge that leads to the Moor, which in turn was interrupted by the loud, liquid song of the first of two Cetti's Warbler.

A nice start. I was hoping to find a few Whinchat, as they had been seen on the Moor the day before, but I didn't find any. Having said that, the Moor covers a vast area, and I didn't cover even a tenth of it (work commitments again). What I did see, however, were three Wheatears, two first-summer males and a female. 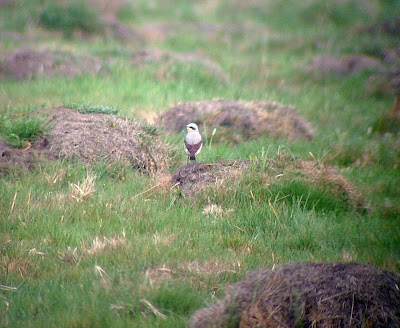 That was it for the Moor. I had hoped also to see a few Yellow Wagtails, but couldn't find any (a Blue-headed Wagtail was reported later in the day).

Next up was the Reservoir, where the midges had arrived with a vengeance and I was aiming at a target bird for the day - one I had missed at the end of last year. Fortunately, it was still on the north basin after being seen there yesterday afternoon right through until dusk. The female Velvet Scoter (123) was easy to spot, but the Slavonian Grebes from yesterday had gone. 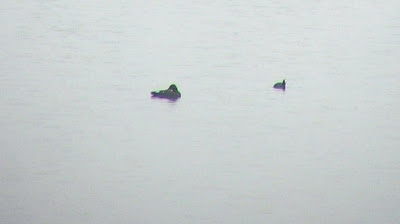 I saw one sleeping Great Northern Diver on the south basin, which was like a still pond, plus at least 30 Little Gulls and three Common Terns (124) - a first for the spring. Also of note was a sole Wigeon. A sprint back home to send the last corrected pages of North American Trainer magazine to the printers and it wasn't long before Annie and I were out again - it was simply too nice to work all day.

A walk around Bookham Common was the plan, and two target birds were on the list. While I didn't see a Marsh Tit, I got the other one. Bookham Common is a nailed-on certainty for Nightingale (125) at this time of year - if you know where to look. The local warden hosts evening walks to hear their magnificent song, which must sound incredible in the dead of night.

As with the Grasshopper Warbler, the bird was impossible to see in a very dense wooded area, and it only sang intermittently. I managed to see one last spring, and I'm confident I will do the same during one the many visits I plan to make to the Common this year.
Posted by Factor at 20:49