The dust has settled as both magazines (Trainer and Thoroughbred Owner & Breeder) are in the process of being printed. There's still plenty of work to do on other fronts, but at least I don't have to get up at five in the morning and finish at two the following morning like I have on some days.

You get used to it, but now I've gone past the half-century mark (still haven't got over it), working long hours takes its toll. The longest stretch I've ever undertaken was for a national karting series programme a couple of years ago. I did 38 hours straight off the bat. Strangely, I didn't feel too bad at the time (the hallucinations were quite pleasant), but I won't be doing that again.

Anyway, work is still constant but at a sensible pace, and we have about 20 bank holidays to look forward to starting on Friday. While that is time to go out to enjoy life (Easter doesn't have the same family duty impact that Christmas has, or at least it doesn't in our house), the fantastic weather at the moment is forcing me to spend more time outdoors before the break.

Late in the afternoon today, Annie and I took a trip out into the country. Having studied the map, we ended up at Holmbury Hill, near Holmbury St Mary. I know the county pretty well, but for some reason I had never been there before today.

In short, it's a stunning setting, and the panoramic view at the top is mesmerising in the sunshine. We felt it was a better view than from neighbouring and loftier Leith Hill. 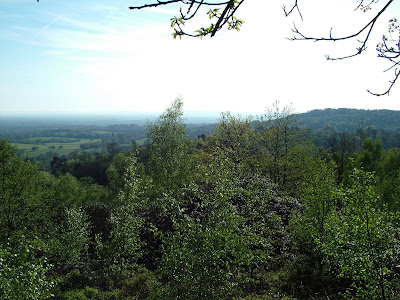 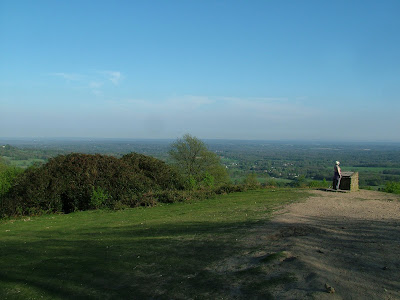 We sat on a seat dedicated to a couple of young mountain climbers who had lost their lives on the Matterhorn a few years ago, and just gazed off into the distance. As a tribute to these lads, the setting and the atmosphere were perfect.

Not much on the bird front, apart from the usual warblers - Chiffchaff, Willow Warbler, Blackcap and Whitethroat. We walked to the Hill Fort at the top of the hill and did a loop round the hillside. A Buzzard drifted by.

On the way round I heard a distinctive bird call in the trees, followed by the sight of a flutter of wings up into the sky, and then a descending parachute-like drop back on to the tree branch, alongside a song that descended with it. A Tree Pipit (126). 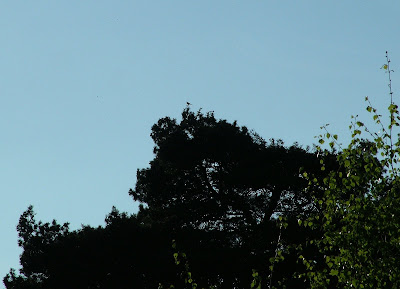 I wasn't expecting to see a new bird for the year, but it was a welcome addition, as was the second Tree Pipit a few minutes later.

It had been a very relaxing walk in the late afternoon sun. After that, we finished off with a quick pint and a small glass of Pinot Grigio at a pub further down the hill. As it was so late, there wasn't time to cook dinner, so we settled for a heat-up curry instead. Perfect.
Posted by Factor at 21:49