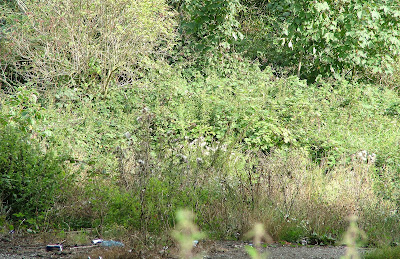 I have had a pretty good run of late, having enjoyed twitching both Hoopoe and Wryneck during the past three weeks. The problem with birding, however, and twitching in particular, is invariably good runs come to an end. Eventually you will dip. There is no more appropriate a word than 'dipping' to describe the event of staring at an empty branch for hours on end when on a twitch.

If I have learnt anything from this hobby, it is dipping leaves you in an emotional state for longer than a successful twitch does. It creates a dip in your mood, that's for sure. It must be the reason some people become seriously and pathologically addicted to twitching. The highs when they happen are great, but the elation stays with you for less time than the despair when you dip, so you have to keep twitching to feed the depleted elation. A dip can stay with you until you nail the bloody bird you keep missing. It's a risky pastime if you wish to remain sane.

I think that's the reason I won't go twitching further than the south-east of England, or in an area I happen to be visiting anyway. The Marmora's Warbler last year was a case in point. A fabulously showy bird that compelled many people to travel miles to go and enjoy. As it turned out, one weekend we were visiting friends in Wales and I had an opportunity to go and see it. Perfect.

I couldn't have faced the prospect of travelling to Cornwall, as an example, to see the American Bittern last year, only to come away drawing a blank. It's just too high-risk for me to spend that much time travelling only to be disappointed. Although, actually there's no guarantee you will feel any better closer to home. In fact, many people say it's worse to dip on your own patch that to dip after a 600-mile round trip.

That's is the danger of twitching. It's a hobby that revolves around anticipation like no other pastime and that emotion builds the closer to the object you get. People who enjoy mothing don't have that problem. Whatever turns up in the traps turns up. There's no way of knowing what you will see.

So, if you are going to dip, dip close to home is my advice. And once you've dipped, steer clear of all the birding websites and blogs until the emotion has simmered down a few days later. What you don't know about, you won't miss.

Why say all this? Well, this week I missed a Grasshopper Warbler at Canon's Farm.

OK, it wasn't the same as dipping a Wryneck, but it was still a truly depressing dip. What made it worse is that this particular Gropper was showing well for long periods - David Campbell described it on Twitter as the most twitchable Grasshopper Warbler on his patch ever. Plenty of people came to see it and went away happy, apart from me.

I went to Canons four times for a total of four and a half hours to see this Gropper, and every time I missed out. Even David was getting stressed out that I hadn't seen it, as though it was his responsibility because it was on his patch. The first visit was just after 5.30pm on Tuesday evening. The bird had last been seen just after 4pm, and needless to say, it didn't emerge for the hour I was there before leaving as the light was deteriorating.

I had another go the next morning, getting up early and getting to the Farm before 6.30am. I stood by the spot it had been seen, in some scrub just at the back of the farm buildings. I waited, and then heard a strange sound - a bit like a cassette tape getting mangled when being played. It was clearly the Warbler, as David had described the day before how it made a strange strangulated sound - perhaps a juvenile that hadn't learnt how to sing properly yet.

I couldn't see it, though. And then it went quite for the next hour. David arrived and he confirmed the sound I heard was right for this youngster, and we waited another half-an-hour. By this time, I was sure it wasn't going to happen - it might sit tight for hours. So I left, with the intention of going to Barnes to see the Ruff and Garganey at the Wetland Centre. After ten minutes, the phone rang. David was watching the Gropper, having moved to a different spot, further back behind the barns.

I had basically been staring at the wrong bush for two hours, as it must have moved soon after it attempted to sing. So back I went, and tried in vain to get a glimpse - but nothing appeared for the next hour. I had to leave as work was pressing (why does it always get in the way!). An hour after I left, it reappeared again.

I went back at 4pm for another go, but again nothing. The following morning it was seen again, but by that time I had decided to give up on it. So that was the Gropper story. I have heard two Grasshopper Warblers this year, but no visual tick.

Since then I have been glued to my desk, so any hopes of venturing out to see a whole flock of birds I haven't seen this year has passed me by. It's been a bad week, but I will get over it. My wife just shakes her head with irritation. She, quite rightly, thinks it's a bit pathetic to get so wrapped up in all this. To dwell is, well, a bit childish really. It isn't life or death. There are far more important things to be getting on with, like trying to pay the mortgage, and building a nest-egg for the future (some hope).

The problem with that, quite justifiable, argument is, that so much other stuff is so incredibly dull. We all need a bit of escapism from the general run-of-the-mill daily routine, it's just that it would be far more satisfying if the wretched animal I want to see had an awareness that it would help my day no end if it just popped up on a branch for a few seconds - I don't think I'm asking that much, am I?
Posted by Factor at 15:00