It had been a beautiful spring day yesterday - spent at home painting the bathroom. Today I was out and about, and it was cold and grey as soot - again. Never mind. I had target birds to find.

The first one was at a typically cold and blustery Staines Reservoir, where I struggled to locate Black-necked Grebe (I thought I saw one in winter plumage at the southern end of the south basin, but I couldn't be absolutely sure) until I bumped into Tice's Meadow man John Hunt after an hour's search, and he steered me in the direction of two close by. I've now seen all five Grebes you are likely to see in Surrey, three of which I have seen at Staines (it counts for me as part of the county, for now at least). 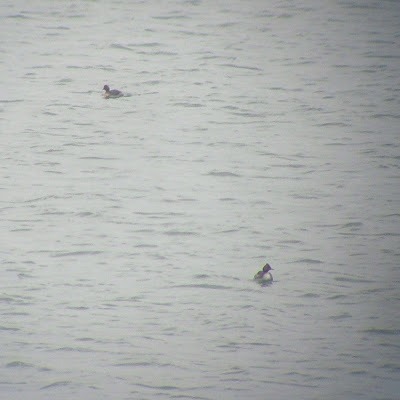 The two Great Northern Divers didn't show while I was there, although they had been seen earlier in the day.

Next stop was Staines Moor. Walking down the path that is to the north of the Moor, I heard my first Cetti's Warbler (102) of the year. The Cetti's Warbler is a regular visitor to the brook here, and will no doubt burst into loud song for quite a number of weeks now it has returned.

On the Moor itself, walking along the River Colne, I found one of my targets - a Water Pipit. Water Pipit are a Staines Moor speciality - there were eight reported here yesterday. I saw two today. The bird species that stood out, however, was Fieldfare. There must have been at least 50 of them perched in the trees and swooping down into an area north of the river. There were also plenty of Reed Bunting, Linnet and Meadow Pipit, plus a few Lapwing. 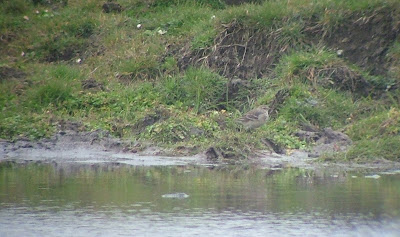 My other target, Wheatear, didn't make an appearance. There have not been many sighted so far in Surrey so I reckon it will be another week before they start dropping in everywhere.

By now the light, for what it was worth, was beginning to fade, so rather than travel to Tilford in the hope of seeing Lesser Spotted Woodpecker, I dropped by Chobham Common on the way home to see the Great Grey Shrike again. It took a while to find it, but I was helped this time by Surrey birder Dick Haydon, who saw it perched halfway up a tree near its larder, just south of the burnt area of gorse mentioned earlier in the week. It was a long way off and any hope of a decent photo wasn't helped by the lack of decent light. It soon flew off and we couldn't re-locate it after that. 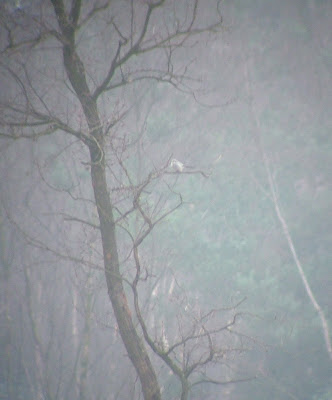 The only other birds of interest were a male Stonechat perched on a post close to where the Shrike was last seen, and a flock of at least 150 buzzing Lesser Redpolls that never seemed to land, so it was impossible to see whether a Mealy was amongst them.

Before long it was time to leave to catch the rush-hour traffic on the M25. There are still a few birds I'd like to see before the spring migration really gets going - Brambling and Firecrest are the notable winter/early spring absentees from my list, but it's not been a bad first quarter of the year.