SPRING WALKS AND SHRIKES IN THE LATE AFTERNOON SUN 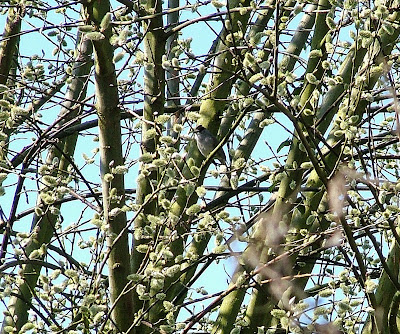 Lots of late afternoon walks in the spring sunshine after work with Annie this week - Denbies Vineyard, South Park/Wychroft near Bletchingley and on the North Downs near Woldingham. The walks were specifically just that, walks - not a birding exercise. Annie isn't that interested in birding (why should she be?) so if we go out for a couple of hours in the late afternoon sun, she wants my undivided attention - quite rightly, rather than have me stop in mid-sentence to peer through my bins at a raptor in the distance (it might be a Red Kite!).

Having said that, I did see a couple of new birds for the year this week. My first two Blackcaps (106) at Mercer's Lake, plus a male and female Red-legged Partridge (107) during the walk around the Wychroft area.

Today, however, I had a spare couple of hours late on to have a wander on my own. Trouble was, I didn't have a plan. I thought about going to Staines Reservoir for the eight Little Gulls seen there today, but then at 4.00pm the rush-hour traffic was going to cause major hassle. I thought about sticking to my local patch to see the Little Ringed Plover that had just dropped in, but then I reckoned I could catch that over the weekend. Puttenham was a possibility for an outside chance of a Raven or Red Kite sighting, or Waxwings in the village. I also considered after Puttenham sprinting back up the A3 to see the Barn Owls at Ripley by the Wey Navigation Canal.

The A3 was the way I headed the car, but I went straight past the Puttenham turning and found myself heading towards Thursley Common instead. Ravens and Red Kite have been seen in the Thursley area, and what the heck, the light was so good I couldn't resist another walk round the Common anyway for some more views of a Great Grey Shrike. You will have noticed by now that I have a thing about Great Grey Shrikes...

What was apparent on the walk to Shrike Hill was the abundance of Stonechat and Woodlark. I saw five male Stonechats plus excellent views of a female, and also at least six singing Woodlarks. Their song was interrupted by the call of a Curlew in the distance.

I trudged up Shrike Hill where I met with another birder from Tilford who hadn't seen a Shrike at all this year. He was heading off back to the car park after a fruitless search when I was forced to whistle to attract his attention and call him back, as I had spotted one of the wintering Thursley Common Great Grey Shrike perched on top of a Silver Birch. I'd only been on the Hill for less than five minutes. Very typical when it comes to seeing this particular bird. Finding it either involves a search that can take half a day or seeing the bloody thing almost immediately. 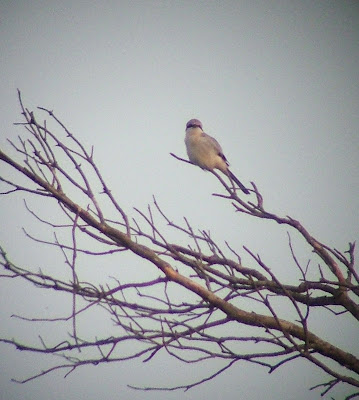 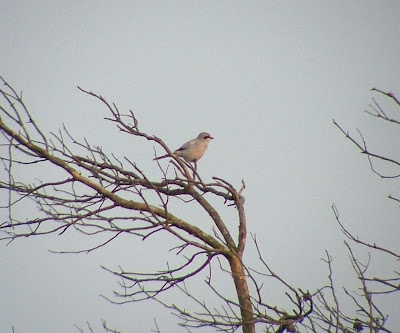 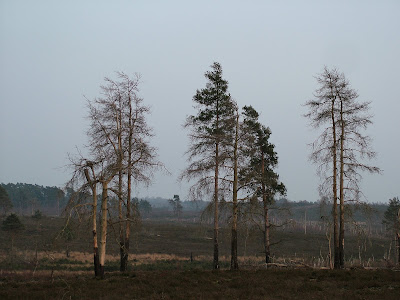 Normally quite a mobile bird, he stayed put for at least 20 minutes. As it transpired, he was digesting a meal, managing to regurgitate a food pellet at one point. He was also quite vocal, calling in a quiet, warbled tone. Who to? Who knows? 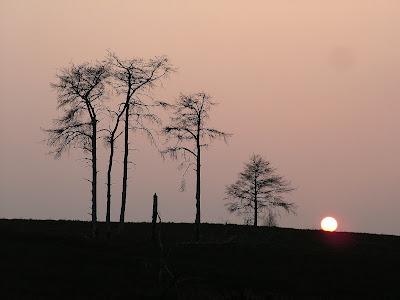 As the sun set he moved on, flying off into the distance underneath pink and orange skies. A tranquil setting, and a splendid way to end the working week.
Posted by Factor at 01:20