WILLOW WARBLER AT HEADLEY HEATH: THE EARLIEST FOR SURREY?

A brief walk around Headley Heath this afternoon was the only option available today - Annie wanted a bit of fresh air and likes the walk around the Heath - before a trip to Waitrose in Banstead to do a bit of early pre-weekend shopping. 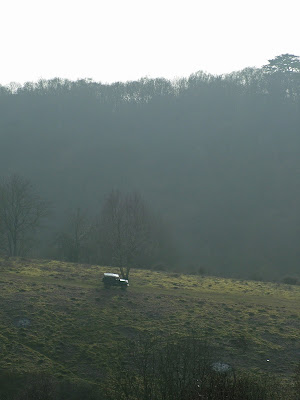 The walk was pleasant enough and the sun made an appearance, which was welcome after so many grey days during the past few weeks. The birds were scant, though, apart from plenty of Long-tailed Tits and a Greater Spotted Woodpecker drumming in the distance.

On the walk back to the car, I was already scheming a course of action for tomorrow afternoon if the predicted heavy rain had passed over. I hoped to try for Lesser Spotted Woodpecker in the fields at the back of Aberdour School near Canons Farm, or failing a sighting there, a visit to Tilford, where at least three have been seen recently. Or, if Sand Martin and Wheatear turn up, a visit to my local patch.

Then, suddenly, a song I recognised, and a first for the year. A Willow Warbler (103), followed by another one in the distance. Headley Heath is a very good site for Willow Warbler - I remember seeing at least ten on one visit here last spring, so they obviously like the place, but this was very early to say the least. Normally, you wouldn't expect to see one of our most common migrants until the end of March/beginning of April. A candidate for the earliest recorded in Surrey, perhaps?

I looked on Rare Bird Alert later to see how many have been seen around the country recently. A single bird today in Dorset, plus one in Crosby, Lancashire and four in Leasowe, Cheshire yesterday appear to be the only Willow Warblers recorded across the country so far. After what started off as a run-of-the-mill walk, I now feel quite privileged.
Posted by Factor at 22:28