It is evidence, hopefully, that I'm not succumbing to Surrey or patch listing, but rather going to look at birds I enjoy. All of which is true, but it still doesn't hide away obsessive tendencies - a birding condition, if we really admit it. Our wives (if we still have one) will tell you as much - seeing as we would rather spend hours walking around a burnt area of Common ground on a Monday afternoon, than spending time at home doing constructive things like painting the bathroom skirting board and window frame (a forfeit I will suffer today).

Yesterday's target bird was a Great Grey Shrike at Chobham Common, as first seen by top Surrey/Bucks/Berks patch lister Kevin Duncan and posted on Birdguides at 1pm this afternoon. The fact is I really like Shrikes. They're just such interesting birds - and there aren't many of them in Britain at any one time - probably no more than 40 in the British Isles at the moment - so in a way it's a privelege to see one, let alone two in a year.

Predictably, having arrived at 2,30pm, I couldn't find it. Plenty of Lesser Redpolls - at least 20 (couldn't tell you if there were any Mealys amongst them, as they wouldn't keep still for long enough to look properly) - but little else. 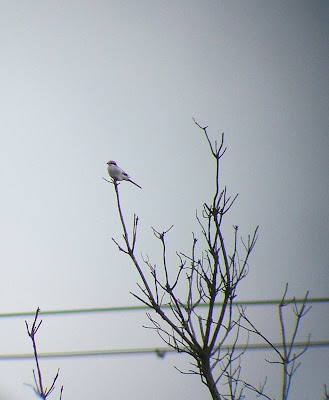 I had bumped into another Surrey birder from Richmond, who had yet to see a Shrike this year - and, unfortunately, he hadn't located it. After walking around completely the wrong area for an hour, I saw him and another birder (it was Kevin) focusing on an area through their binoculars, and there it was, in typical pose, perched high in a tree. 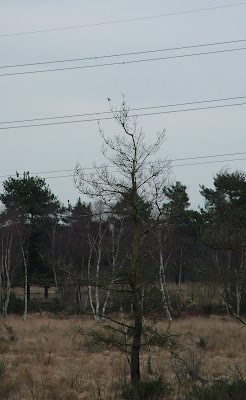 This Great Grey Shrike stayed in the same place for a good 30 minutes at least, and so was unlike the Thursley Common bird, which tends to move around a lot more. The reason, it transpired after talking to Kevin a little while later, was that this Shrike had a larder set up a short distance away, where it had already caught and impaled a lizard. We actually watch it drop down and feed for a while from its store, before moving on. This Shrike was a top performer and well worth anyone travelling to Chobham to watch. It tends to stick to an area of flatter ground just on the edge of the burnt region, south of Albury Bottom just before the pylons. Well worth a visit if you have a few hours to spare.

I'm now up to 100 species for Surrey this year - a pair of Grey Wagtail (100) got me there. They are a nailed-on certainty near Leigh Mill House, just off the A22 south of Godstone, where a fast-flowing stream joins a fishing lake.

Next up, Wheatear. None yet seen on the Holmethorpe patch, but it can only be a matters of days before they are.
Posted by Factor at 02:13