Spring is almost open us, and the amount of bird activity building up presently across the south east is a tell-tale sign. On the south coast, the first Sand Martins and Wheatears have landed, plus locally we've had Curlew back at Thursley Common, plus plenty of sightings of Red Kite, and a number of Grebes and wildfowl dropping in on various places.

I made my way to Staines Reservoir yesterday morning. It was bitingly cold. During the winter months at Staines it always is. It doesn't make any difference if there's little breeze, once you walk along the causeway a cold wind does its best to burn your face off.

I'd made a point of travelling to Staines to see a Black-necked Grebe that had been seen the day before, and better views of the two Great Northern Divers that had been on the reservoir regularly for the past week or so. I arrived at about 7.30am, and there were already plenty of other birders around. I met up with Bob Warden, but he hadn't seen much before I arrived. We scanned the area for a good hour but apart from the Scaup (it had been at the reservoir for a number of days), we saw little apart from plenty of Goldeneye.

I then had an epiphany moment (they don't happen often), when I was considering leaving and heading off somewhere else. As I said my farewells, I happened to ask another birder whether he had seen the Great Northern Divers, and low and behold, he had - just 30 minutes earlier on the south basin - and as far as he was aware, they hadn't flown off.

They had to still be around. Before long, after another scan of the area, remarkably, I locked on to the first of two Great Northern Divers. I hadn't seen anything for an age, but as soon as someone had said they must be still in the area, I was on to it without a problem. This birding hobby is 80 per cent exasperation and 20 per cent inspiration. 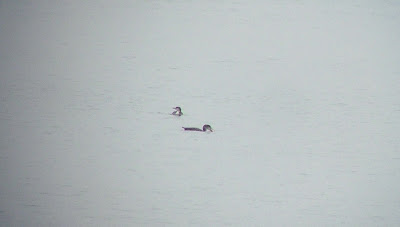 To add to the enjoyment of the moment, this Diver disappeared underwater for some considerable time, only to reappear with a very large fish - of which it spent the next 30 minutes at least, trying to eat. Eventually, the second Diver drifted into view.

Before long, other birds made an appearance. A drake Smew dropped in out of nowhere, and moments later Bob spotted a Slavonian Grebe land on the water, which I picked up soon after. While the Black-necked Grebe had been seen on the north basin a couple of hours earlier, none of those present - including me - could find it.

It didn't matter much really. It had been a very successful morning, all in all. No additions to my Surrey list, but that shouldn't really be the point. I had, in the end, made the correct decision by staying put in one place, rather than moving to an another site. If I had have upped sticks, I would have seen nothing memorable. As it was, I had a very good morning's birding.

Over the past couple of days, I had taken a few lightning-short visits to my local patch at Holmethorpe and come across a group of Treecreepers. An unusual sight, as I have only ever seen a couple of birds together, never alone three to four. They are remarkably well camouflaged. One bird sat statuesque on the side of a Silver Birch - it could have easily have been missed - and it stayed put until I got really close to it. It made me realise what an attractive little bird a Treecreeper is, and unusual. 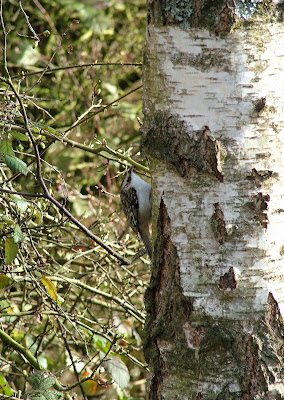 The other new birds for 2011 were three Lesser Redpoll, seen at Headley Heath on Friday. Annie and I went for a very late afternoon walk, and with a Goldcrest, a singing Marsh Tit (didn't see it) and a Nuthatch, it had been a very relaxing end to the working week.

Next stop will be a visit outside of the Surrey listing area to Old Basing - if I can - to see the White-tailed Eagle. I keep my fingers crossed it stays put for the next couple of days.
Posted by Factor at 00:22

Email ThisBlogThis!Share to TwitterShare to FacebookShare to Pinterest
Labels: SA