SPOTTED A BARN OWL, NO LESS

A cryptic headline but it fits the bill. Today was a typical birding session - 10 per cent inspiration (probably even less than that in my case) and 90 per cent perspiration.

The day was hindered by rain in the afternoon, so I left it late to go on the hunt for Lesser Spotted Woodpecker in the fields next to the Aberdour School, near Banstead. I spent a good hour looking for one, but all I could muster as I circled the aptly named Circle Field were two Great Spotted Woodpeckers. I'll have another go, hopefully, on Sunday morning.

Rather than going home empty handed, I took a detour down the M25 (during rush hour) to Ripley and the Wey Navigation Canal as the sun at last appeared low on the horizon. Kevin 'Kojak' Guest and Johnny 'Badgeman' Allen had seen two Barn Owls late yesterday after a tip-off from a local Surrey birder, and after a quick phone call to Kojak for directions, I was on site, by the River Wey, just before the bridge that leads to the Newark Abbey ruin. 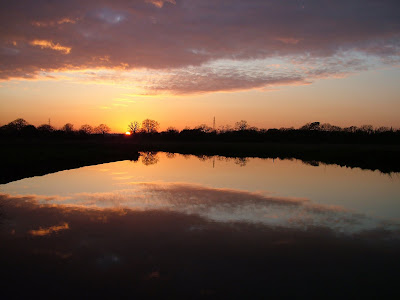 Right on queue at about 6.15pm (Kojak and Johnny had seen the bird at almost exactly the same time yesterday evening) and as the sun was setting while I was taking these photos, I was aware of movement in my peripheral vision. A gorgeous Barn Owl (104) was flying low over the flood plain before turning and disappearing out of view behind a clump of trees. 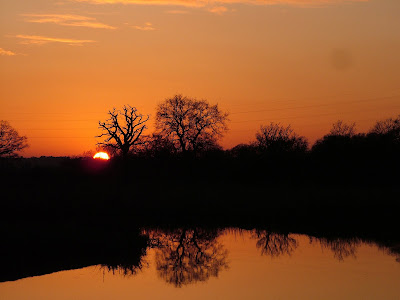 I waited for at least half an hour for the Owl to quarter over the area in front of me by the river but it didn't show. By now it was almost completely dark as the full moon was shining bright - a return visit is in order to get a better view of one of the most majestic and increasingly rare British birds.

So that was it. I had set off from home just after 4.00pm and walked back through the front door at 7.30pm. During that time I had seen one target bird for less than 15 seconds. But that's how it goes with this hobby. Always appreciate small victories.
Posted by Factor at 23:15